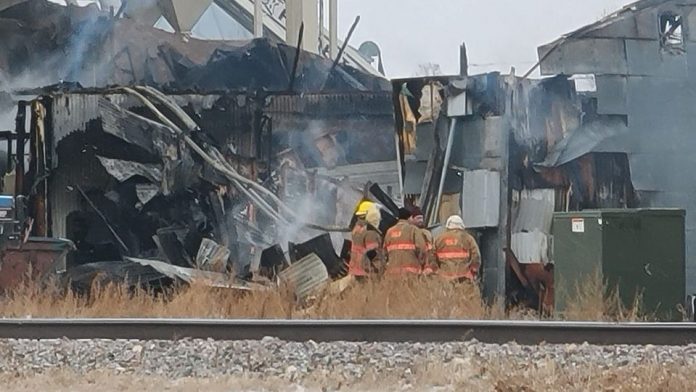 Argyle fire was the first fire department paged for the fire however was assisted by fire departments from: Warren, Stephen, Viking, Newfolden, Oslo and Alvarado and Hallock. Warren Ambulance and Stephen Ambulance were also called to the scene in case of injuries. The Marshall County Sheriff’s Office also responded.

Damage was limited to a shop at D and D Commodities which had followed a duct system used as part of the seed-cleaning system. The ladder truck from Hallock Fire was called in to prevent the fire from spreading from the south side of the building to the north. The wind was from the north on Friday and spreading the fire to the windward side would have made the situation much worse.

The Hallock Ladder truck can fight fire with a tremendous amount of water which requires tanker support.  This is one of the reasons for the need of several agencies who provided water support along with firefighters. The State Fire Marshall was notified of the fire  and there were no injuries. Tony Deshcene from Argyle fire wanted to thank all responding agencies and that Argyle fire appreciates the support of its mutual aid partners.

4 PIRATE WRESTLERS AND SEVERAL AREA BASKETBALL AND HOCKEY TEAMS ARE...