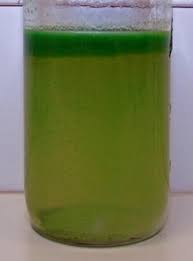 If your lake or pond water appears very green, the jar test can help determine if the color is from blue-green algae, or just an overabundance of more beneficial types of planktonic algae.

Materials  include a clear pint or quart  jar , such as a canning jar or pickle jar with label removed also some rubber or latex gloves. With the gloves on, collect a sample just below the surface of the water (avoid collecting just the top layer of scum). . Fill the jar about three-quarters full. Do not fill the jar completely; algae give off gases that may cause pressure buildup in the jar that could break it.  Wipe any scum off the outside of the jar and screw the lid on.

Now put the jar in a refrigerator and leave it undisturbed overnight. The next day, carefully remove the jar from the refrigerator and see where the algae has accumulated. Do not shake or agitate the jar at all or the algae will mix into the water again and negate your test results. . If the algae are settled out near the bottom of the jar, it is likely that your lake does not have a lot of bluegreen algae.  If the algae have formed a green ring at the top of the water, there is a strong possibility that your lake does have a bluegreen algae community,

Avoid or minimize recreating in waters that appear to have a blue-green algae bloom; if you do come in contact with algae-laden water, wash with fresh water afterwards.

In general, fish that are caught in areas of a waterbody where major blue-green algae blooms are occurring may be safe to eat, as long as the guts of the fish are discarded. However, it’s uncertain how much algae toxin can accumulate in filets, so anglers may want to wait a week or two after algae blooms are over before fishing and eating fish from waters where a bloom is occurring.Pets, especially dogs, are susceptible to harmful algae because they are relatively small and tend to swallow more water while swimming and playing (e.g., retrieving a ball from the water). Dogs may ingest algae if they lick their coats after leaving the water. They are also less deterred by green, smelly water that may contain harmful algae.

To reduce your animal’s exposure to blue-green algae:

If you suspect your pet has ingested blue green algae, call a veterinarian immediately.